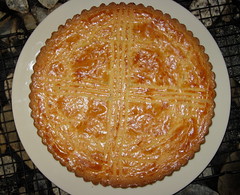 After the very elaborate trifle, this week's 'easy' cake (it's on the list in the back of the book) was a relief. The recipe describes the Gateau Breton as a cross between a pound cake and shortbread, two of my favorite desserts. This looks like a can't fail recipe for me, so count it as easy on the tasting end too.

I didn't take many pictures of this one in process because indeed it was easy, and I made it even easier by using purchased almond meal instead of grinding my own toasted almonds. The almond meal was made from unblanched almonds, adding little extra color to the cake. To avoid messing up the food processor, I sifted the almond meal together with part of the sugar to get them well mixed. Then it was on to beating butter and sugar, adding in the egg yolks one at a time, then the almond meal and sugar combination, vanilla, and a tablespoon of dark rum (which added a surprising amount of flavor). Finally the flour went in in four parts, and the batter was ready for the pan.

I had a 9-1/2" x 1" tart pan, not the 1-3/8" that was called for. The batter very nearly filled the pan, but as Rose said, the sides rose above the pan as it baked with no spillover or other unpleasant consequences. Mine did take more than the maximum 45 minutes to bake, going by temperature.

Tasting results: I love it--indeed, as I predicted on reading Rose's description, this cake is right down my taste buds' alley. Sister-in-law allowed herself one small bite and also really liked it, though the nephew and younger niece thought it was too plain and got blueberries on the side. Not me--the joy of this cake is the rich buttery cake with a hint of rum. I'll be trying this again and experimenting with some other options from the liquor cabinet. Oh, and maybe addding some fruit on the side....even if it isn't necessary.
Collapse